Official YouTube Playlist
Season 5 Remastered Video
This is an overview of episodes 84 to 102 in the series, 7 Days to Die.

The new season starts in the immediate aftermath of the end of Season 4, when "God's" minions drove Aaron and Emre into the Void. Finding themselves separated in a new wilderness, they quickly dismiss the significance of that event to focus on getting themselves back on their feet. Aaron discovers a foggy town he names Bethlehem and guides Emre to join him there. Finding a tiny, fortified shack near a college dormitory, they take it over for use as their first base.

As they continue to explore, they move their operations to an underground bunker under a country house, which they modify to create the Kill Grille. The emergence of one of their deadliest foes to date - bears - prompts Aaron and Emre to reveal more of their pre-apocalyptic lives.

While out building mini-bikes in advance of the Day 21 horde, Aaron and Emre take shelter at an unusual building, and Aaron realizes that he's accidentally found his way home: the facility where he first created, and then accidentally unleashed, the zombie plague that destroyed the world.

Returning to where it all began (or ended, depending on one's point of view) fills Aaron with a sickening and unfamiliar sensation of guilt. Seeking to atone, Aaron agrees to Emre's command that he destroy the Skyscraper of Babel, a vacant building Aaron has become strangely obsessed with, and a symbol, in Emre's mind, of the failings of mankind and science.

This season updates to Alpha 12 and takes place in a randomly generated world map. A player-created mod (the COMPOPACK) adds numerous new POIs (points of interest), including most of the focal locations this season. Alpha 12 introduces a number of notable new features, including mini-bikes, bears, and more varied weather. Aaron and Emre encounter a few new zombie types for the first time, most notably ferals (known as wraiths from Alpha 16 onward). Zombies now ragdoll when killed, and flashlights can be affixed to guns. The moments of sunrise and sunset are now distinguished by musical stings.

A quirk of the weather system results in Aaron and Emre sometimes perceiving different levels of light and fog. Aaron sees near-constant fog, which he blames on hallucinations caused by long-term infection. (In reality, the creeping fog is a bug that tends to affect the player hosting the game.)

The "invisible bear" that kills Emre in Episode 89 is most likely the result of game lag.

During this season, Aaron and Emre have day lengths set to about 30 minutes, so each game day is only slightly longer than a single episode. 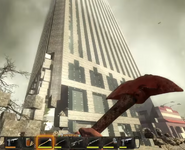 Retrieved from "https://game-society-pimps.fandom.com/wiki/7_Days_to_Die_(season_5)?oldid=11990"
Community content is available under CC-BY-SA unless otherwise noted.