Aaron Yonda (born January 19, 1973) is an American comedian, writer, director, producer, and actor for the Game Society Pimps and editor for the 7 Days to Die series. Aside from working on his gaming channel, he is the founder of Blame Society Films. The company is famous for the web-series Chad Vader: Day Shift Manager. Aaron co-produced the series with Matt Sloan and plays Chad Vader. Aaron and Matt are currently co-producers and co-hosts for the show Beer and Board Games and Rated RPG.

Aaron was born on a farm in Menomonie, Wisconsin. He attended the University of Wisconsin - Eau Claire and graduated with an English degree.[1]

Before the turn of the century in 1993, Aaron founded Blame Society Production and produced The Splu Urtaf Show as a public access television show.[2][3][4] With his friend, Matt Sloan, who joined the company in 2001, they would go on to create a wildly successful YouTube series by the name of Chad Vader: Day Shift Manager.[5][6]

In 2006, Aaron produced a short film, The Life and Death of a Pumpkin. The film was awarded "Best Short Film" and "Best Concept" by the Chicago Horror Film Festival and have been screened at festivals worldwide including The Super Shorts Film Festival in London, and the Clair-Obscur Film Festival in Basel, Switzerland.[7] The short has also been shown in classrooms across the United States as educational material.

In 2010, Aaron piloted a show called Beer and Board Games. Faithful to its title, Aaron and his co-host Matt invite guest comedians and play various board games while drinking craft beers. The show has featured many well known guests such as author John Green, YouTuber Hank Green, and music creator Kevin Macleod.[8]

Blame Society Films has a second channel on YouTube, blamesociety2, which focuses mainly on the eccentric character Hal Thompson, played by Aaron. Hal is known for "ham, goats, and miniature couches for obvious reason." He has since moved to Blame Society Film's main channel.

All three members of the Game Society Pimps play video games for footage but Aaron is usually the main member playing the Kinect games. This is especially true for Disneyland Adventures and Harry Potter Kinect. Aaron has expressed high levels of dissatisfaction towards playing any Kinect games and his complaints have become a staple of Game Society Pimps. 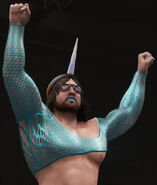 Retrieved from "https://game-society-pimps.fandom.com/wiki/Aaron_Yonda?oldid=11821"
Community content is available under CC-BY-SA unless otherwise noted.