Graskull is one of seven survivors who find their way to Aaron's radio tower after Aaron has set it up to broadcast a beckoning message about a safe zone called Pleasure Town. Graskull is wary of Emre's religious zealotry, and when Kaydalyn demonstrates that she shares that trait, he murmurs to Metastergo that they should have killed her when they had the chance. (Episode 119 - New Recruits)

When Emre forces everyone to hear his toxic, self-aggrandizing sermon at Super Church, Graskull is one of several recruits to call out Emre for his blasphemy, with Graskull countering Emre's preaching with twisted scripture of his own. When all of the new recruits but JWM and Kaydalyn reject Emre's preaching and leave, Graskull turns back to proclaim that he will see Super Church burned to the ground. Emre unloads a round of warning shots directly into Graskull's chest, killing him. Aaron hurries Graskull and Metastergo away from the church. Graskull again suggests burning Team Emre, but instead Aaron takes him on a tour of his home. Given the choice between a "religious nutbag" and a "pervert," Graskull chooses the latter: Team Aaron. Graskull approves of Aaron's extensive party rules, remarking that it just sounds like a typical Irish house party. (Episode 120 - Toxic Sermon)

Aaron gives his two followers the option of choosing their own "code names," and Graskull opts to be called "the Antichrist." After Team Emre takes pot shots at Aaron's cacti, Aaron puts Graskull and Metastergo to work building a huge wall to separate their houses. (Episode 121 - Building a Wall)

Due to Aaron's time machine invention, Graskull has turned into a giant rampaging monster and has a duplicate of that monster form. In monster form, he "allegedly" commits friendly fire. The monster form also shows a proficiency with rocket launchers, opting to destroy anything he wishes.

In episode 147 Devil Babies, Metastergo and Graskull both become pregnant and pop out super babies.

After Aaron and Emre get sent to Day 660 (Episode 152 - 175), Metastergo is assumed to be dead by everyone but JWM. Graskull forces  JWM onto the top of the funeral pyre in the belief JWM was responsible for Metastergo's death.

Has killed the most survivors from both teams.

Evilverse: Evilverse Graskull and evilverse Elfilon are discovered in a small oasis, with grass and trees, tents and being surrounded by a "magical" white ring that burns and kills any who cross it. Evilverse Graskull comes across as depressed, disbelieving that Elfilon's teleportation tech would work.

He seems friendlier to Emre and standoffish with Aaron. He also seems depressed about the world, saying that he had seen one person in particular "Have his rectum pulled out of his mouth and inserted back in his ass"

When Aaron seduces the blueberry woman, he brings Emre out of that room, back to the Hall of Good Council to eat some bacon and eggs.

When asked what is going on in the world he responds "Nobody tells us anything, it's like we've been living under a rock"

He seems to have a paradoxical relationship with religion, complains that if Emre should start religious talk he should leave, yet openly says "Jesus" or "Jesus Christ" when frustrated. Also scrawled it on the last working science machine"

During the horde night, Evilverse Graskull flees deeper into the base out of fear, much to Aaron bewilderment

Eventually he leads Aaron and Emre to the bowels of the base, revealing Metastergo as a huge abomination, complete with extended abdomen the likes of only seen in egg laying insects. Through out the encounter Graskull is seen flattering Metastergo, in a bit not to risk her wraith. After Aaron places the brain chip into one of Metastergo's offspring, Graskull puts the Evilverse Aaron in his new body down. Metastergo enraged orders all her minions to attack, forcing everyone to flee. In the chaos the vault fail-safes go off trapping Aaron in the pit. Graskull leaps down and begins to construct a way out for Aaron, while Aaron holds them off. Eventually the two escape, not before launching a few rockets down into the pit to destroy the ladder. 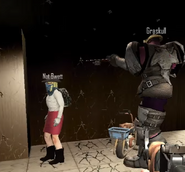 Add a photo to this gallery

Retrieved from "https://game-society-pimps.fandom.com/wiki/Graskull?oldid=10828"
Community content is available under CC-BY-SA unless otherwise noted.